Tiering up for Italy in October

THE ECB’s new two-tier system for excess liquidity began operation on October 30th. As a result, up to six times banks’ required reserves held in current accounts with National Central Banks (NCBs) of the Eurosystem will no longer be subject to the negative deposit rate (currently -50bps) but rather the new tiering rate of 0% interest. The surplus above this will be charged, however.

Of course, over the summer euroarea “core” banks had liquidity far in excess of this tiered ratio. Meanwhile banks in the periphery—Italy in particular—had less, mirroring TARGET2 imbalances. For example, German banks in August had perhaps 16 times required reserves in excess liquidity, Italian banks only slightly more than 3. Any rebalancing of excess liquidity to take advantage of the tiering system held out the prospect of somewhat unwinding previously accumulated TARGET2 imbalances—a happy side-effect, perhaps.

The publication on Friday of the end-October Bank of Italy balance sheet takes on additional significance, therefore. Can we detect the impact of the new tiering system?

Consider Figure 1. The Bank of Italy’s TARGET2 debit experienced the largest one month decline on record, falling  48 billion to reach  420 billion—the lowest level since October 2017. This is particularly interesting because there was already a sharp inflow in June following Draghi’s Sintra speech as markets anticipated the re-introduction of asset purchases—as there was in early 2015 in advance of Asset Purchase Program (APP) initiation. However, while this summer’s inflow drove Italian yields lower as a new and substantial buyer was in prospect, the October TARGET2 debit decline was after the announcement of renewed APP and not coincident with lower BTP yields. This suggests inflows not related to bond buying, therefore. 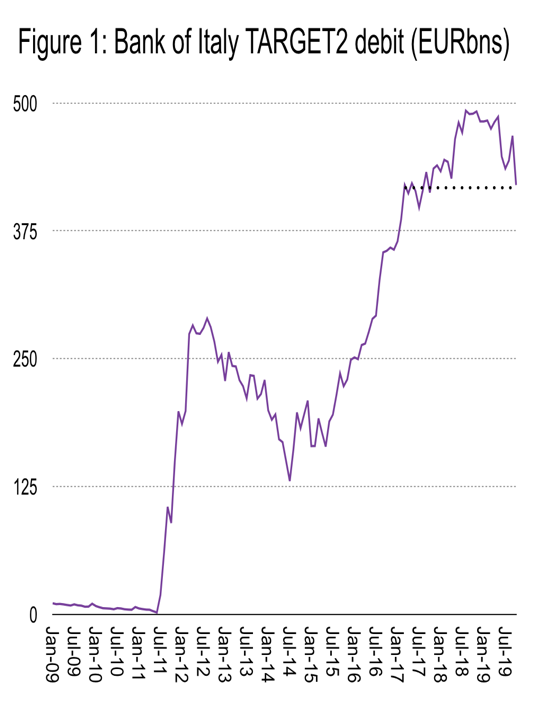 An additional clue as to the drivers of this sharp fall in the TARGET2 debit is provided by considering the counterpart balance sheet entry to these inflows. Indeed, since only bank NCB current accounts count toward tiered reserves, they would be a candidate destination. And indeed, banks’ current accounts with Bank of Italy increased  37 billion to reach  138 billion over the month of October, the highest level on record. Meanwhile, the deposit facility fell to the lowest level since early-2017. Figure 2. 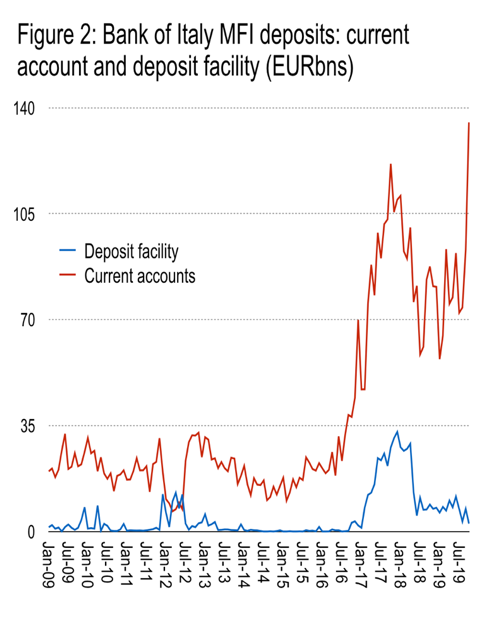 To be sure, we don’t know for certain required reserves are in Italy. But they can be estimated at about  18 billion (1% of non-financial sector deposits). As such, required reserves plus six times tiering (7* 18 billion) is equal to about  126 billion. Roughly, banks in Italy would need this amount to avail themselves fully of the full tiering rate. And banks indeed appear to have generated such inflows over the last month.

Presumably, Italian banks access interbank funding at a negative rate from core banks for deposit at 0%, gaining a pickup in the process. Meanwhile, those core banks that would pay 50bps on excess-of-tiering reserves to the Eurosystem can now payItalian banks less for the latter to deposit in Italy instead.

Figure 3 shows daily unsecured interbank lending rates for the euroarea since early May as published by the European Money Markets Institute. These are priced off the transactions of 18 contributing banks, of which only two are Italian. This is an indication of possible funding rates. 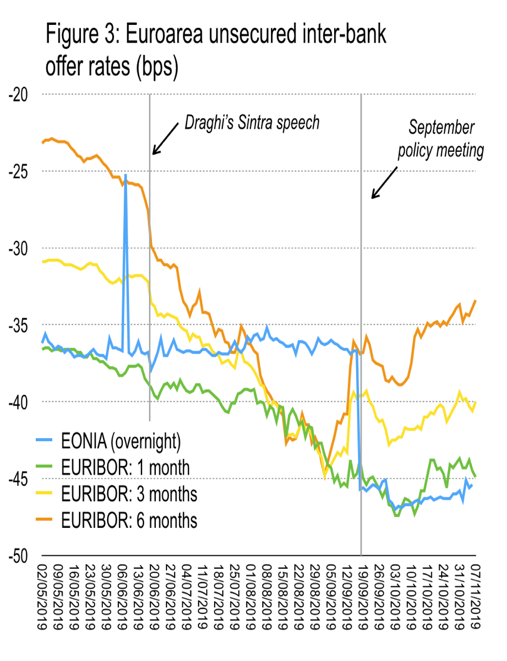 Let’s suppose Italian banks had an aggregate shortfall rounded to  50 billion approaching end-October—we knowthey were holding  72 billion in current accounts as of 4thOctober, with  7 billion in deposit facility, so were roughly  50 billion shy of  130 billion. We cannot know the exact rate or tenor that Italian banks might have accessed funding to top up their liquidity for tiering, let’s imagine they accessed at the 3 month Euribor rate of -40bps. For Core banks with plentiful excess liquidity, they would pay 50bps for holding this with Eurosystem NCBs, costing roughly  20 million per month, or perhaps  1 million per working day. If they instead fund Italian banks at -40bps, they can reduce their aggregate monthly cost on this  50 billion to only  17 million, or about  0.8 million per day. Against this, Italian banks will be able to make a profit of roughly  0.8 million per dayfor borrowing from Core banks and depositing with the Bank of Italy at 0%. So in this thought experiment Italian banks are, in the aggregate, being paid about  17 million per month by Core counterparts to fill their tiering ratio. These Core banks, in turn, save themselves about  0.2 million in negative interest payments to their NCB in the process.

It is perhaps of some interest to note the change in unsecured interbank lending rates reported since October 4th, the prior reading on current accounts held by Italian banks. And through 7thNovember, so over roughly one month, interbank lending from 1 week to 3 months increased by about 2½bps; that on 6- to 12-months by more than 5bps. Perhaps this increase, if slight, is the imprint of greater lending to Italian banks for this purpose.

Alternatively, other sources of funding, if available at negative yields, would provide for similar gains. Italian banks could have issued securities, for example. 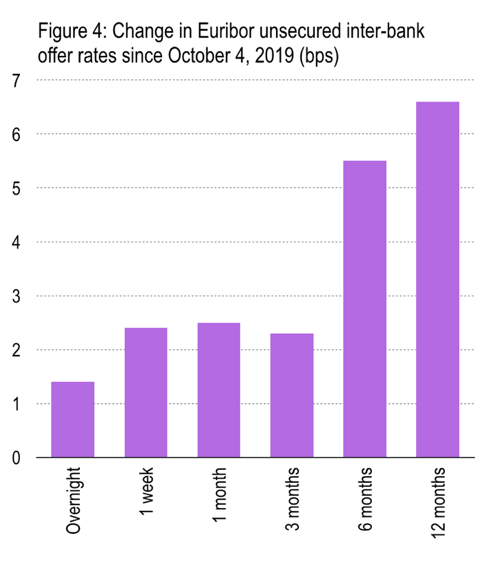 As to the origin of these funds, the monthly changes in liquidity and TARGET2 balances in creditor countries can be substantial—and driven by other flows. But the Bundesbank end-October balance sheet alone is broadly consistent with these flows. For example, Other Assets of the Bundesbank (a proxy for TARGET2 credit) fell  42 billion during October, while deposits of euroarea credit institutions in Germany fell  21 billion. The difference between these two being due to a reduction in non-euroarea deposits with the Bundesbank (i.e., reserve managers), which fell  15 billion, and general government deposits, which fell  12 billion. These therefore injected liquidity that would have otherwise fallen further owing to outflows (presumably) to Italy.

In any case, a curious side-effect of the tiering system, intended to shield core banks from ever-more-negative deposit rate, might indeed be to increase inter-bank funding and leave a potentially indelible impression on TARGET2 imbalances. To wit: Italian excess liquidity in October appears to have jumped sharply to cover required reserves plus exactly the 6 times tiering ratio.

Perhaps this is welcome in a world where TARGET2 imbalances for some take on Satanic proportions. Still, this rebalancing is small and one off. Big picture, it changes little. Though it does demonstrate once more that you don’t get $100 dollar bills lying on the sidewalk.

2 thoughts on “Italy: Tiering up in October”