“Twenty years of schooling and they put you on the dayshift.” Subterranean Homesick Blues, Bob Dylan, 1965

Through these vehicles, official country and region responses—ad hoc and uncoordinated—are somehow brought into harmony. And these forecasts are lapped up by the financial press. The Financial Times (FT) being one, where Martin Wolf reels off the IMF’s forecasts as sacrosanct and serious.

However, upon closer inspection, the IMF offers up only gibberish for public consumption. User beware.

Consider Figure 1, which plots the WEO 2019 current accounts for roughly 190 countries against the change in current account in 2020 (y-axis). The left chart shows these in percent of GDP, the right in billions of US dollars.

Obvious from the left side of Figure 1 is the fact that the vast majority of countries are expected to experience a deterioration in their current account balance in 2020. Indeed, of the 191 country forecasts, 148 (77½%) are expected to experience a weakening external balance—either smaller surplus or larger deficit—measured against own country GDP. As such, the COVID-19 shock is expected to cause the majority of countries a negative current account shock. At first blush, this seems odd—since one country’s deficit is another’s surplus etc. There seems to be an adding up problem.

Of course, one explanation would note that these are measured relative to GDP. Once converted into USD, the adding up problem could disappear—many small deficit moves could be offset by a smaller number of larger USD surplus adjustments.

However, the latest WEO does not provide nominal GDP projections—in contrast to standard reporting. We do know that global USD GDP is projected to fall 4.7% from USD87 trillion in 2019 (see Statistical Annex A, Table A1). So, we have to adlib. Using the October 2019 WEO database adjusted for revised real GDP, CPI inflation (as proxy for GDP deflator), and an adjustor for nominal exchange rate, we can reverse engineer this contraction in global GDP. A few countries fall out along the way. But by applying the resulting USD values to the current accounts, we get the initial current accounts in USD against the 2020 change. See the right side of Figure 1. And it at once becomes clear that the problem remains. The vast majority of country cases lie below the horizontal axis. There is no symmetry in adjustment.

Figure 2 shows the same information in a different way. For countries where the change in current account is greater than USD2 billion in absolute terms, it shows the 2020 current account change for individual countries arranged by size. Ireland’s projected current account improvement is the largest, at nearly USD60 billion. This is clearly an aberration, owing to peculiarities of Ireland’s corporate tax regime and associated accounting anomalies. This is followed by Brazil, Korea, India etc. at about USD15 billion. Moving to the other extreme, we see that Japan, Saudi, China, Russia, Germany, Iraq, Switzerland, Kuwait etc. are expected to see a current account deterioration of USD50-100 billion each. These are examples of net commodity and pivotal manufacturing exporters all mixed together. Yet no one else is “benefitting” in an accounting sense from their deteriorating external conditions. 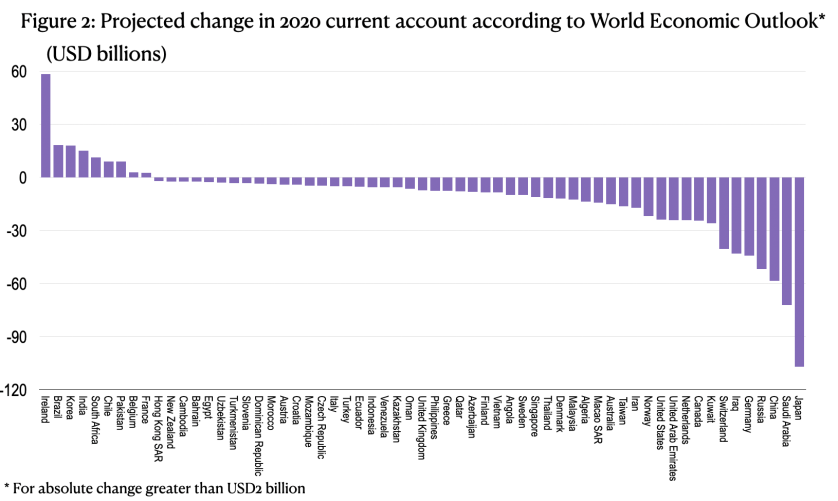 In short, there is nothing obviously wrong with each individual forecast. But we know that the world as a whole must add up. And there has been no effort made to assure any symmetry amongst external balance responses to COVID-19.

How can this be? As noted previously, one of the more perplexing aspects of the global economy since around the turn of the millennium has been the change in sign of the global current account discrepancy. That is, previously the global economy ran a persistent deficit of about ½% of GDP—reflecting inconsistent reporting thought related to income account discrepancies, where advanced economies would underreport investment income from abroad for tax reasons.

Since about 2005, however, this global discrepancy has turned to surplus—perhaps related to asymmetries in service balance reporting, corporate tax treatment, or the rise of emerging market goods trade. Whatever the reason, this sustained surplus is now a feature of the global economy—equivalent to errors and omissions in aggregate reporting. However, the IMF’s current account projection for 2020 eliminates entirely this current account discrepancy, and instead registers the largest global deficit discrepancy of all time. Figure 3, right side.

What does all this mean? Well, it doesn’t mean anything. Or, more precisely, it reveals the poverty of IMF macroeconomics. It means that the IMF’s flagship analytical vehicle at the time of COVID-19 is only a crude adding up exercise providing little global direction. Each individual country team produces their own macroeconomic forecast, including the impact on their country’s current account. And the IMF’s Research Department sums them up. And that’s it. As a result, about ¾ of the IMF’s individual country forecasts are able to show a negative impact of COVID-19 on their external current account balance, resulting in a change in the global current account of about USD750 billion. There has been no effort to understand the global adjustment in gross and net current spending of income flows. Every team sees a negative impact on their particular current account, so the global forecast reflects this—when, in fact, at a global level the net impact on current accounts should be close to zero allowing for the mysterious discrepancy.

What are the implications? The most obvious is that the net current account deterioration globally will not be as bad as the IMF projects. Of course, this alone doesn’t tell us which countries. But the net external financing needs due to current transactions will be for many countries lower than forecast on this basis. At a time when the IMF is arguing for larger resources to manage the crisis, this is a concern. Absent an explanation for these forecast anomalies, it looks like the talking up the external financing gap of many economies in order to increase their financial firepower.

But even if net flows will be more favourable, gross goods and service adjustments could be more substantial, and with them overall activity and—as knock-on—external financial flows. What is gained in terms of net current accounts could be lost in terms of capital flight upon careful consideration of the overall macroeconomic impact.

This leads us to yet another way of viewing the IMF’s aggregated current account forecasts. Seen in terms of the difference between global saving and investment—or output and absorption—the latest forecasts imply that individual country teams in the aggregate see their export performance weakening more than their domestic absorption—or saving falling more than investment as economic units draw on savings to sustain spending. Once aggregated, individual forecasts are thus revealed as more pessimistic about spending prospects elsewhere, hence export performance, than they are about their own countries’ spending. In this way, the external adjustment is biased towards global deficit. A consistency check on country forecasts would require either export performance to be revised up globally—consistent with aggregated spending—or domestic absorption lowered. Given home bias in spending, the latter would involve a larger downward adjustment to individual and global growth forecasts—whereas the former would imply a smaller upward adjustment as export performance improves.

All of this is to say that the IMF’s WEO forecasts are littered with inconsistencies and serve in no way to guide global policy or achieve macroeconomic policy coordination. They are a naïve adding up exercise or little use for serious monitoring of the global economy. They consequently undermine the financial stability assessment in the GFSR and the fiscal analysis in the FM. And they also confirm that after twenty years of schooling, they put you on the day shift.

8 thoughts on “COVID-19 and the poverty of IMF macroeconomics”