As Lebanon painfully approaches hyperinflation territory, what policy adjustment is needed there to attain “sustainability”? Last November, using a framework devised for assessing Argentina’s consolidated government sustainability, I undertook a “smell-check” on the situation there. And the results were sobering to say the least, making Lebanon “Argentina on steroids.”

Now, there are many qualified on the specifics of the Lebanon situation, so this is only an outsider’s look at their dilemma. The following amateur remarks set the stage. Government debt-to-GDP was about 150% mid-2019. In recent years, the government had been increasingly financed by BDL (central bank) purchases of government debt—mainly T-bills—though commercial bank exposure was also substantial. In addition, commercial banks and BDL had become increasingly embraced through in a series of transactions to shore up reserves which meant they had substantial claims on the central bank beyond “base money;” such central bank bills carried a decent coupon which BDL needed to finance. So, as in Argentina, the question of sustainability of the central bank alongside the fiscal authorities emerged. 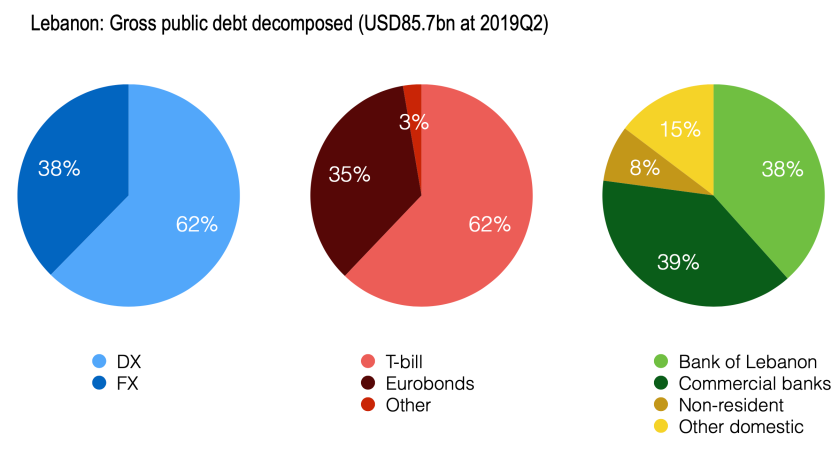 While the central bank balance sheet data was not completely transparent—some of the liabilities could not be accounted for—there was enough to go by to ask, with a few assumptions, what kind of macro adjustment would be needed to restore government debt to somewhere the IMF might be able to call “sustainable.” In the case of Argentina, the Fund has subsequently argued on the need to bring public debt there closer to 40% of GDP. But the charts below assume a target of 60% or higher for Lebanon.

Anyway, the first chart below shows the combination of real interest rate on government debt and primary surpluses needed to achieve various debt-to-GDP ratios in 5 years (left) and 10 years (right.) Suppose the real interest they pay to be 5%, then to achieve 60% debt-to-GDP over a 5-year horizon requires a primary surplus of over 20% of GDP. With the primary balance roughly zero, this would be an adjustment far from reasonable. 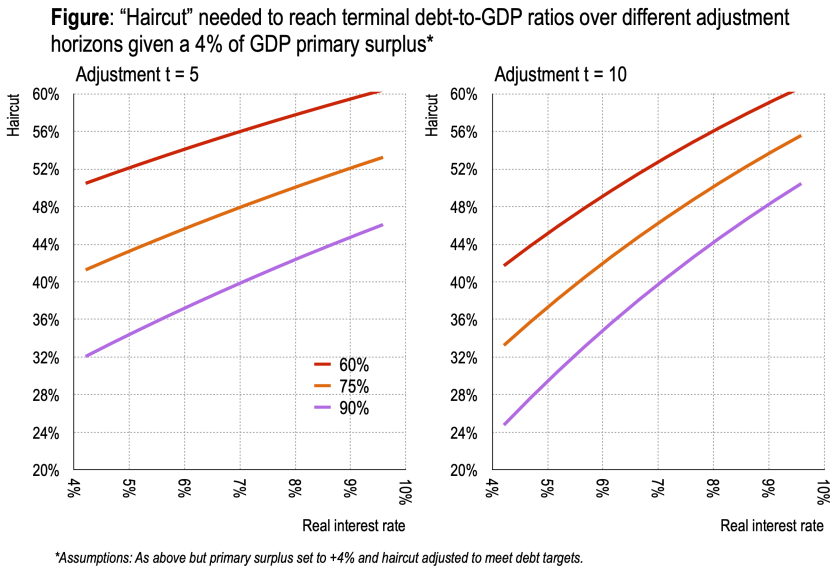 The trade-off can be spelt out more clearly, as below. The larger the steady-state primary surplus the lower the necessary haircut.

A word of caution: give the accounting holes in the BDL balance sheet, even this exercise was highly uncertain.

Still, the conclusions then were pretty clear. The eurobonds looked richly priced still, the redemption earlier this year highly uncertain, and the macro-financial situation dangerously close to collapse. After all, once you apply, say, a 50% haircut to government debt the commercial banks would be pretty much bankrupt, deposit haircuts would come into view, and it was not clear how the government would finance itself. And this was all pre-COVID. Resorting to hyperinflation is a sad and painful sticking plaster.

Dornbusch’s notion a crisis takes a much longer time coming than you think, and then it happens much faster than you would have thought, continues to apply. But in this case, the domestic and international policy response to what was a foreseeable disaster has been astonishingly limp, meaning the crisis could drag on much longer than strictly necessary.

One thought on “Lebanon and on and on”