There are a number of curious similarities between Nigeria’s macroeconomic challenge and Argentina’s only a few years ago—making it a subject of additional interest to those familiar with the latter’s experience.

First, the Central Bank of Nigeria (CBN) has been propping up gross international reserves by borrowing from abroad—whereas in Argentina Lebacs were sought by non-residents for their yield in 2017/18, artificially driving up reserve assets, in Nigeria of late, according to the IMF, “almost half of [international reserves] were the counterpart of short-term naira debt issued to non-residents at high rates by the Central Bank of Nigeria.” International reserves of around USD37bn is only 50% of the IMF’s reserve adequacy metric (¶2), also comparable with Argentina. But since USD14.8bn of these reserves at end-Dec owe their existence to non-resident short-term claims, reserve adequacy is further compromised—although these non-resident claims had fallen nearly in half by end-March.

Second, particularly due to the oil price shock, exports as a share of GDP in Nigeria are frighteningly low—as they were in Argentina until GDP contracted sharply in dollar terms. Indeed, in 2018 Nigeria’s exports of goods and services as a percent of GDP were 16.6% but will fall to 9.4% this year and will remain low throughout the IMF’s forecast horizon—projected at only 8.8% in 2025 for example. This is an extremely slender base upon which to service external debt; non-resident claims on the public sector in 2020 is projected at 180% of exports of goods and services.

And, third, both turned to the IMF for support—Argentina via the now-lapsed exceptional access Stand By arrangement (SBA) in 2018 and Nigeria through the IMF’s Rapid Financing Instrument (RFI) that will provide 100% of quota in financing; that’s about USD3.4bn or 0.8% of GDP, comparable with Bolivia.

That said, in contrast to Argentina, Nigeria’s public debt is only about 30% of GDP and less than ¼ of this stock is denominated in foreign currency, making valuation effects on debt more limited. As such, the prospect of continued exchange rate adjustment and inflation will keep a lid on public debt—though at some cost to real income.

Still, just as Argentina’s program design raised questions about macro-financial sustainability, Nigeria’s RFI Staff Report provides a host of reasons to be concerned about medium-term prospects. A number of anomalies stand out.

The document assumes the exchange rate remains pegged around NGN360 per USD hereafter, following the March devaluation of 15% from NGN306. The GDP deflator is projected to grow 89% from 2019 to 2025, or 61% measured in USD (Table 1, p.14). Nominal GDP growth in USD terms measures 11% on average, increasing from USD448bn in 2019 to USD836bn. Despite this rapid increase in USD income and appreciating real exchange rate, imports of goods and services in 2025 at USD106bn are barely larger than the USD101bn recorded in 2019; imports as a share of GDP drift ever lower. As such the goods and service deficit remains below 4% in 2025 from 7% in 2019.

Returning to the monetary accounts, the definition of reserve—or high powered—money used by the IMF is a headscratcher. In the CNB balance sheet (Table 7, p.20), reserve money is defined as currency in circulation plus bank deposits plus additional deposits—the latter being mainly deposits by non-financial public enterprises and other financial institutions. This means the IMF’s definition of reserve money is larger than that reported by the CBN, particularly since 2015 when deposits of non-financial public enterprises with the central bank increased sharply. Whether this is logical when thinking through the monetary propensities in Nigeria will be left unanswered here. But central bank deposits of non-financial public enterprises withdraws liquidity from deposit money banks—the latter being typically more important for the evolution of broader monetary aggregates.

There’s more to be said about the monetary analysis, however. In the first instance, just as with Bolivia, the IMF’s medium-term projections rely upon the central bank for the preponderance of fiscal financing. The fiscal deficit remains over 4% of GDP throughout, with central bank financing of around 3% of GDP from 2020-25, or between 60% and 80% of deficit financing throughout (Table 5, p.18). This is likewise reflected in the NCB accounts, with NCB net claims on Federal Government increasing from NRN5,202bn in 2019 to NRN50,662bn in 2025—or from 3.6% to 16.8% of GDP. Of this NRN45,460bn in monetary financing, only NRN17,968bn shows up as an expansion in base money. Instead, “other items net”—which enters net domestic assets with a negative sign—is seen to withdraw NRN26,117bn of liquidity, moving from -NRN12,238bn in 2019 to -NRN38,355bn in 2025.

“Other items net” (OIN) is often ignored as a catch-all for boring balance sheet items including central bank capital or alternatively abused as a “residual”—which is isn’t. As with Argentina, in this case OIN is where the action is. Central bank bills issued as “open market operations” as well as the central bank’s profit and loss, or net fiscal transfers, are presumably captured here—or ought to be. OIN suggests nearly 60% of fiscal financing of the deficit over the next 6 years will be absorbed through this line item. 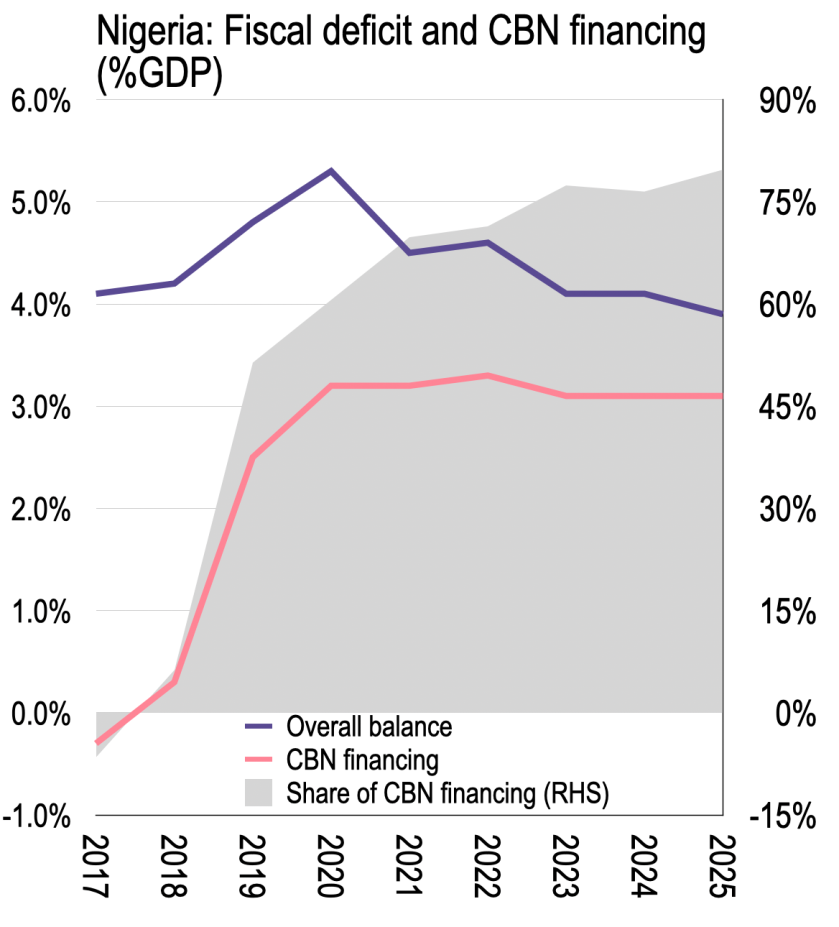 Whereas in Argentina BCRA bills were shown separately, here OMOs are only implicit. A projection is not available. Moreover, the staff report implies in the first instance outstanding OMOs should be allowed to roll-off to allocate towards government borrowing “Staff is of the view that [domestic financing] remains the most appropriate in view of the large stock of maturing OMOs (about N6 trillion domestic), which provides substantial space to issue domestic bonds—which are currently trading at very favorable yields— without crowding out the private sector.” However, as this liquidity is recycled back to the banking system central bank absorption will have to increase again to prevent pressure on Naira and the balance of payments—as is hinted at through OIN.

Finally, it’s worth noting that Nigeria’s situation is not as dire as Argentina insofar as the interest rate on liquidity absorbing instruments was substantially higher in the latter case. At the moment the yield on OMOs is running in the range 11.5-12.7% for between 3- and 12-months. Argentina was routinely paying 70% on 1-week absorption which created intense rollover risk and an interest bill that had to be monetized as BCRA income was returned to government. The capital position of CBN is not clear, and profit and loss opaque. But if the IMF’s tables are accurate then, unlike in Argentina, CBN will at least be holding interest bearing government securities—so there will be a coupon to offset at least part of the OMO instruments.

Nevertheless, the above observations lead to a number of conclusions—not least the need for substantial exchange rate weakness ahead both to contain USD value of GDP, which races ahead with real exchange rate appreciation, and the ratio of foreign exchange reserves to central bank monetary and near-monetary liabilities. For Argentina, periods of expanding central bank liabilities and declining ratio of net foreign assets to said liabilities would end with the snap move in exchange rate to revalue assets in local currency.

We can back out an estimate of CBN OMO bills from OIN to measure (revised) reserve assets to central bank liabilities (left side of figure below.) The ratio falls from about ¾ in 2018 to below 0.2 in 2025—meaning there are 5 times as many base money and OMO liabilities as reserve assets by the end of the forecast horizon. Meanwhile, USD GDP is approaching USD900bn. Alternatively (right side) we move the naira exchange rate to sustain the ratio of foreign assets to central bank liabilities at 0.5 throughout. This shows the exchange rate moving to above NGN900 per dollar by the end of the period as there is a secular nominal depreciation of about 10% per year. The USD value of GDP is likewise considerably lower, but with a higher inflation path throughout—not reflected here—this should remain closer to existing levels. 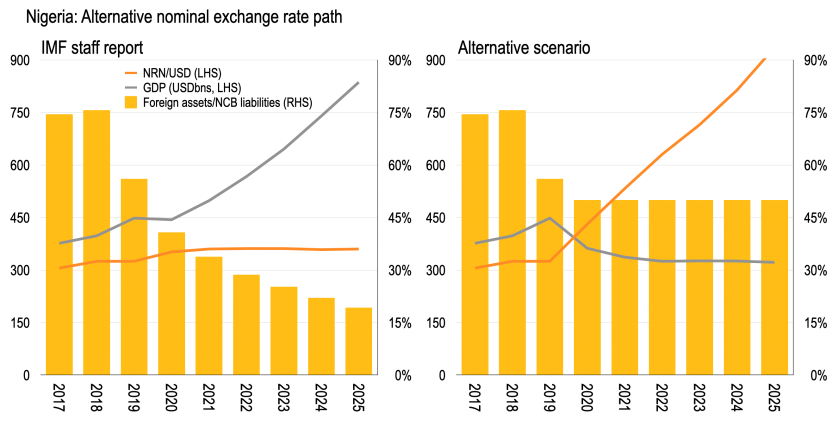 In any case, watching Nigeria unfold from here—as with Argentina for the past two years—ought to provide another test for reason over hope in macroeconomic analysis, and another example of the poverty of IMF macroeconomics.