The Central Bank of the Argentine Republic (BCRA) provides, with a short lag, updates on daily contributions to the change in Peso (ARS) base money. With this, BCRA on Thursday offered a glimpse into their reaction function in response to the acute market pressures that followed the primary election outcome. What can be learnt from this experience?

First, local LELIQ claims on BCRA are flighty. In short, ARS257bn of LELIQs were maturing on Monday 12th August; together with interest (annualized at 62.6%) of roughly ARS3bn this provided a rollover need of perhaps ARS260bn to neutralize the impact on base money. However, they were only able to rollover ARS100bn in LELIQ (at 74.8%.) And so, they replaced less than 40% of the LELIQs falling due. Most (but not all) of the rest contributed to the expansion of base money from ARS1,345bn outstanding as of Friday to ARS1,487bn on Monday.

Second, BCRA is willing to intervene on the spot market. For the first time under the latest monetary leg of the program, BCRA engaged in spot market intervention…

Third, that said, BCRA is very reluctant to run down gross reserves to protect ARS. Total spot intervention on Monday amounted to USD105mn. Let’s guess at an average intra-day exchange rate on Monday of, say, ARS55—doesn’t matter much in the grand scheme of things. That amounts to roughly ARS6 billion sterilization. And so, of the ARS160bn of LELIQs not rolled over—most of which presumably sought refuge in foreign exchange—less than than 4% was sterilized through intervention.

What sterilization was permitted under the IMF program? Some intra-marginal spot market intervention was allowed, but never acted upon. Most important, once the upper band of ARS51.5 was reached, BCRA might “be prepared to sell up to US$250 million (an increase from the previously announced US$150 daily limit) and may undertake additional interventions to counteract episodes of excessive volatility.”

If last Monday does not meet the definition of excessive volatility, then nothing does.

Thus, despite extraordinary market volatility, BCRA remained largely passive—utilizing less than 50% of the permitted intervention margin under the program. Why? Let’s imagine BCRA were to choose to defend the upper band supposed under the program and sterilize all the LELIQs that failed to rollover. At the upper bound of ARS51.5, this would imply running down about USD3.1bn of gross international reserves to defend the currency. What does BCRA’s external position look like? Figure 1 provides the answer, plotting Gross International Reserves (GIR) since end-March 2018. GIR was USD61.5bn before pressures began in April 2018. Today’s GIR is barely changed at about USD65bn. On the face it, BCRA has a war chest to defend ARS. However, this overlooks the massive official support that has been provided over this period. Figure 1 also shows cumulative IMF (USD44bn) and China swap line (USD8.5bn) support over this period as well as GIR net of this support. This net reserve measure reached USD12.5bn as of Tuesday. In addition, there is a legacy swap line from China believed to be around USD12bn, meaning that the true net reserves figure is roughly zero. (Note, BCRA external loans were reported at USD21.8bn as of end-2019Q1, which is mostly these PBOC swap lines.) 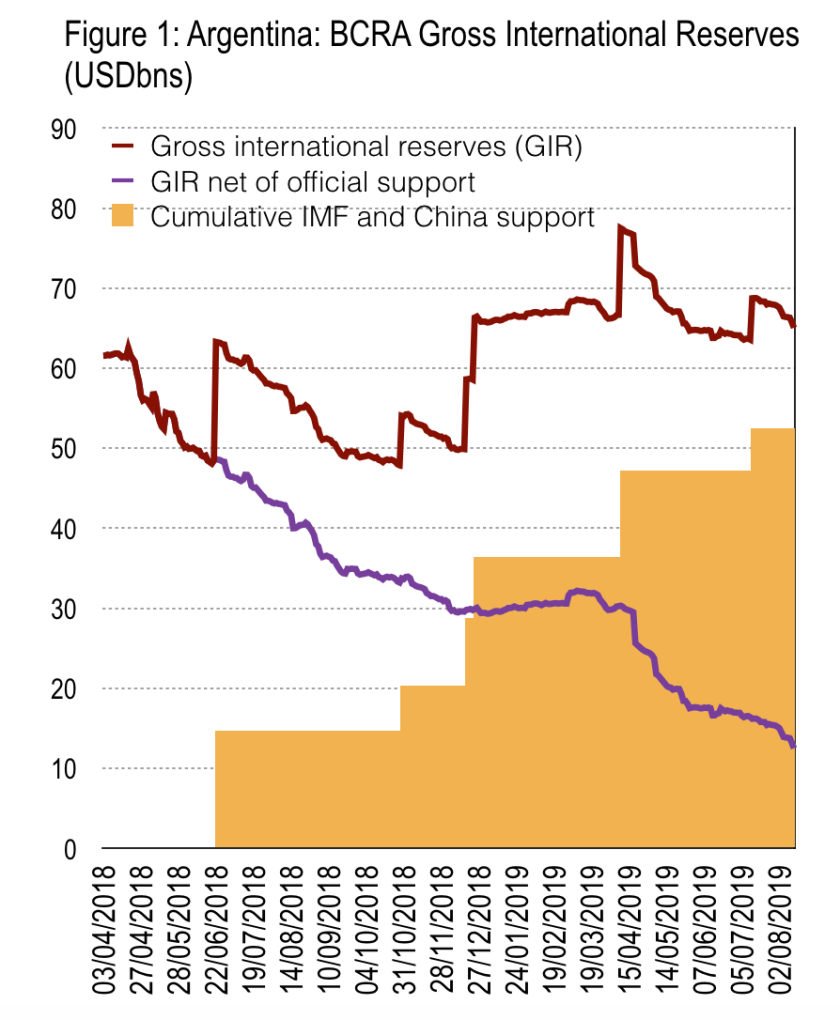 This helps frame BCRA reluctance to make use of gross reserves to defend the currency—even if USD3bn seems small in relation to their reported gross reserves, the true external position is much weaker than this. And USD3 billion would have driven the net reserves position so measured negative.

Finally, we should note that BCRA also intervened on Tuesday last week in the amount of USD150mn—so more than during Monday’s meltdown, and USD255mn in two days. Meanwhile, LELIQ rollovers were resumed at reasonable levels, but at an interest rate of about 75% annualized.