THE LATEST International Monetary Fund (IMF) program document for Argentina—the 3rdReview—was published earlier this month. This document sheds light on the drivers of the public debt sustainability analysis (DSA) that underpin the program.

Since the issue of debt sustainability in Argentina will recur after the upcoming Presidential elections, it’s worth asking: What are the assumptions that underpin the latest IMF document? Do they make sense? And what does this imply for investors?

Let’s start with the evolution of projected public debt since program initiation in June 2018. At the time of program initiation in June 2018, debt-to-GDP was expected to peak below 65% in 2018 before falling below 55% in 2o23. The latest review has debt-to-GDP peaking above 85% in 2018 though falling to below 60% in 2024. The convenience of extending the forecast horizon a year allows the economically meaningless though apparently optically necessary 60% debt-threshold to be met by 2024. (When will the IMF disabuse us of this meaningless number?)

What has changed over these different reviews? The most important recent driver of the debt stock relative to GDP is the valuation adjustment of foreign currency-denominated debt given nominal exchange rate depreciation. As of end-2017, 68% of public debt was denominated in foreign currencies (largely dollars); by end-2018, with program borrowing and another dollar bond issued in 2018Q1, 76% of public debt was fx denominated.

It’s useful therefore to review the exchange rate assumptions that underpinned the respective documents. Now, the precise exchange rate assumptions are hidden deep within the documents. But we can back out the implied USDARS exchange rate from the national income (period average) and monetary account tables (end of period). The left side in the chart below shows the expected year average exchange rates implicit at program initiation, where ARS was expected to depreciate only 56½% against USD from 2016 through 2023, with most of this deprecation happening by 2019. Instead, the nominal exchange rate adjustment was much sharper, with USDARS reaching 38 by end-2018, well above that initially expected for 2023; the valuation adjustment on the stock of fx denominated debt therefore drove up the stock of public debt up by about 30 percentage points of GDP, considerably above that anticipated only last June.

Perhaps most interesting, the latest review further revises the exchange rate over the forecast horizon. Instead of ARS reaching 46 in 2023 as at the 1stand 2nd Reviews, it is now expected to depreciate to touch 63 on average that year and 67 by end-2024. Thus, from ARS depreciation of 15% from 2019 to 2023, the latest review builds in a 33% depreciation over this period against USD. This is a substantial revision to the projected nominal exchange rate path, especially given the high share of fx-denominated debt and the extraordinarily tight monetary policy that has been initiated under the program— including zero base money growth, substantially negative in real terms.

The assumed nominal exchange rate depreciation means the large share of USD-denominated public debt will continue to increase over the forecast horizon when measured in local currency, contributing to deteriorating debt dynamics. How then is the program document able to show a declining stock of public debt when measured relative to GDP? The answer is in large upward revisions to nominal GDP in local currency—mostly coming from upward revisions to expected inflation as measured by the GDP-deflator. Again, while the original program assumed NGDP to grow 17% on average per year from 2016 to 2023, the latest program has growth of 26%—given the lower path of real GDP since initiation, the program now implies much higher average inflation rate. The compounding of higher nominal GDP growth therefore drives GDP to above ARS44 trillion by 2024, though in USD terms only slightly higher than the 2017 flow of USD650 billion. Again, in contrast to the extraordinarily tight monetary policy agreed for 2019 under the program, the Fund now assumes continued nominal exchange rate depreciation as well as large GDP-deflator inflation over the forecast horizon. The expected higher inflation and exchange rate weakness also coincides with base money growth picking after 2019—so recent control of base money is apparently not expected to last.

To assess the two factors side-by-side, the next chart shows the cumulative growth in nominal GDP, GDP deflator, and ARSUSD from 2016. Note, the latter measures the percent change in the number of local currency units that can be bought with 1 dollar; this represents a 77% depreciation properly measured against USD over the horizon.

Crucially, while the nominal exchange rate has “overshot” through 2019, the program has NGDP growth racing ahead of the weaker exchange rate to bring down the stock of debt-to-GDP—with about ¼ of this is due to the GDP deflator. For this reason, the program document emphasizes “projected real peso appreciation in 2019 will improve debt dynamics.” The 3rd Review does not reveal that this is not expected to materialize alongside continued nominal peso depreciation, with inflation catch up and surge ahead of the exchange rate adjustment. Of course, the real exchange rate proper will be impacted in addition by the average inflation rate amongst trading partners, so these comments leave out this important aspect. But it demonstrates the key contributors to falling debt-to-GDP—namely cumulative NGDP growth, including due to the GDP deflator, running ahead of the weaker exchange rate from 2018. 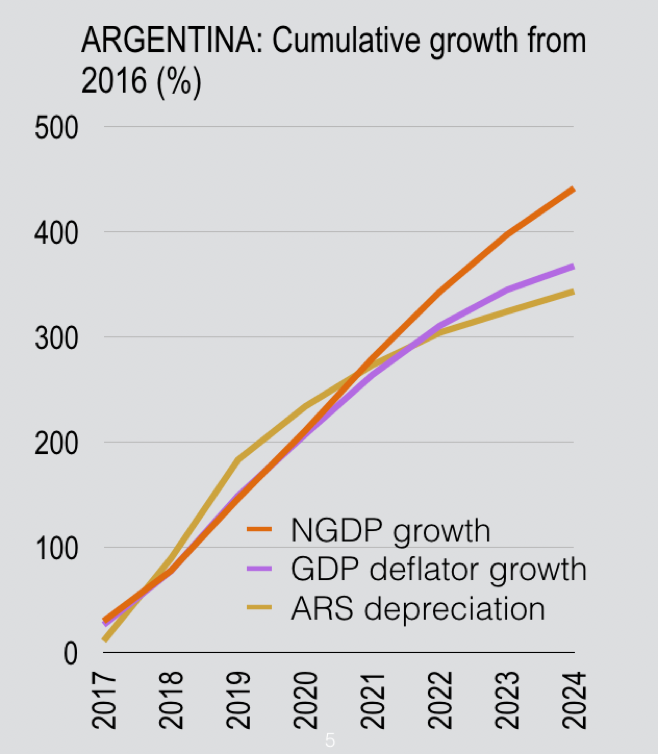 Put another way, the IMF’s DSA hinges on “financial repression”—or, negative real interest rates for investors in both local and foreign currency debt when measured with respect to the local GDP.

How realistic is that local investors will continue to finance the rollover of domestic debt at substantially negative real yields? Given the risk of default, will non-residents continue to fund Argentina—including the roll-off of IMF funding—at manageable rates? Is the implied nominal interest over the forecast horizon reasonable?

Here’s where the challenge of interpreting debt sustainability gets messy for Argentina. It crucially hinges on the definition of Federal government and the portfolio choices of non-Federal-government public sector. In short, there’s a lot hanging on the definition of government. The original program document focussed on “gross federal government debt, which includes intra-public-sector debt” including debt owed to the central bank (BCRA, apparently at effectively zero interest), social security (ANSES), and other public sector entities (including provinces). As of end-2017, 48% of Federal debt was owed to other public sector bodies; as of the latest program “About 35 percent of the federal government’s debt is held by other public-sector entities and provinces. Nearly 70 percent of this intra-public-sector debt is denominated in US$, and within this, the majority are low-interest Letras Intransferiblesheld by the BCRA.” 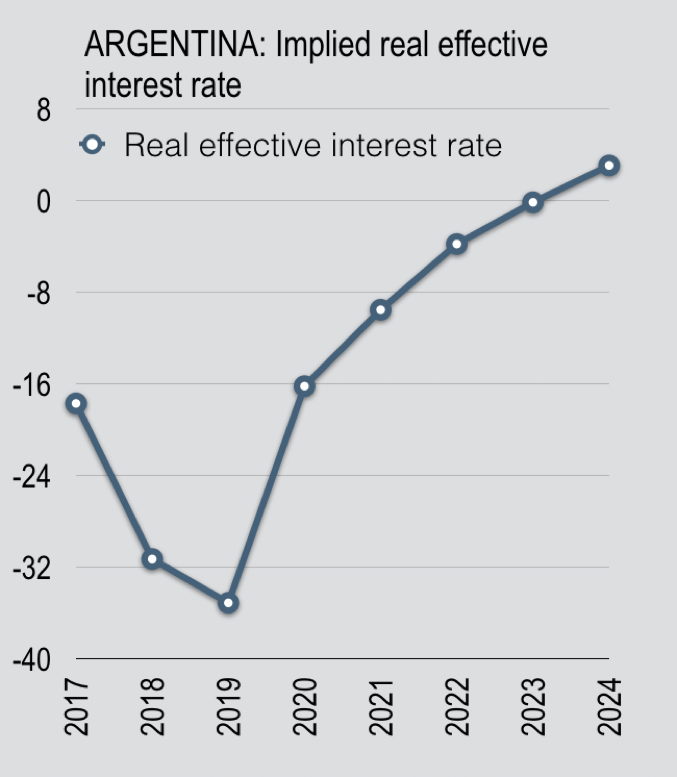 There is much more that can be said about Argentina’s program—looking at the balance of payments, monetary accounts, and likely future path of GDP. But narrowing in on the DSA is enough to get a smell-check as to the realism of the program. And there are substantial problems with the sustainability analysis. But future adjustment will likely take a different form—with larger compression of domestic demand, greater current account adjustment, and a surplus of domestic saving that can be used to finance public sector in outer years as the economy stabilises.

But it is most likely that nominal and real interest rates will be higher, and the stock of debt stuck at a higher level for longer—but the economy will stabilise and inflation moderate. This will raise the prospect of debt restructuring after the elections in October, once the IMF narrows in on more sensible macroeconomics. In the meantime, the greater damage to real incomes that will be materialise creates the possibility of a less outward-looking and more populist government. Will the IMF agree to rollover the program with a permanently higher stock of debt under a Macri government? Or will the IMF look to restructure debt in an orderly way? Or will Cristina decide to turn away from financial markets, creating a disorderly resolution to Argentina’s external debt challenge once more? A sensible view of the DSA suggests any of these outcomes could materialise.

6 thoughts on “A note on debt sustainability in Argentina”